An Antidote to the Attack on Masculinity: Kids Books for Boys that Teach the Value of Masculine Traits

It’s no secret that feminists, leftists and modern society have pushed for and insisted on the feminization of nearly every institution you care to mention. Sadly, it doesn’t just affect grown men anymore. It affects literally all males and it’s their mission to get at boys while they’re young, and apparently, the younger the better. Suddenly, I find I’m wrong if I say it starts in school. Now, it’s an omni-present, multi-faceted, multi-medium, pernicious attack on boys and masculinity: e.g., through cartoons, posters, TV shows, advertising & movies.

Having said that, let’s start with the education system. It’s correct to say that schools are highly feminized environments, where elementary schools are staffed with female teachers at a rate of 90 percent, to include the administrators. And it doesn’t get much better as kids progress through the system. In the processes and methods the school’s utilize and endorse, it’s also obvious that nearly all schools favor girls and punish boys (indirectly and directly), even giving lower grades to boys, just because they’re male. When it comes to teachers’ marking results, an OECD study reported that there’s a consistent pattern of girls’ work being marked up. Yes, it’s well documented that teachers favor girls as model students who are agreeable and sit still and they reward them for it, and at the same time they punish boy-style, energetic, rambunctious behavior from boys. Dare a boy question what’s being taught or not sit still. Even worse, over the decades, schools have become much more sedentary, feeling-centered, competition-free, risk-averse, collaborative, protective, less stoic, and less aggressive places, where talking, crying and collaboration are promoted. And it’s not limited to the classroom. There’s no more cops and robbers or super hero imitation and games allowed, and tag, kickball and dodgeball are banned for safety reasons. (But not so for Brilliant Bob and his friends who love the game of Tag and running around at recess.) 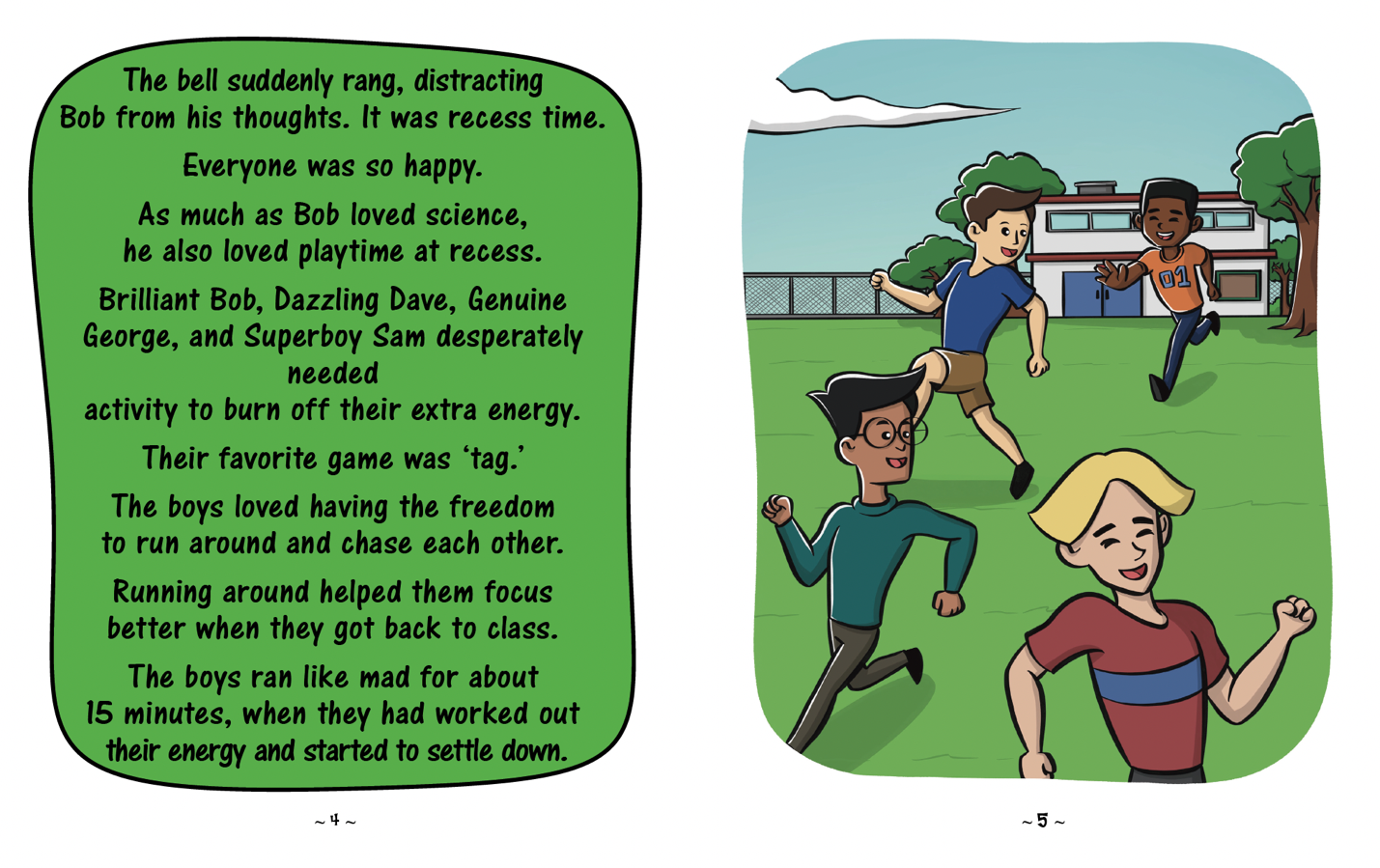 It’s reality and practice that boys’ imaginations and their likes and interests have been criminalized at school. Thus, boys don’t get on at school nearly as well as girls. They’re not as engaged so they underperform. Is it any wonder the number of boys who said they didn’t like school increased 70 plus percent since 1980 and that boys get 70% of the Ds and Fs and girls receive 70% of the valedictorian awards. (Here Genuine George bucks the trend and aims to be the smartest and the fastest in his school.) 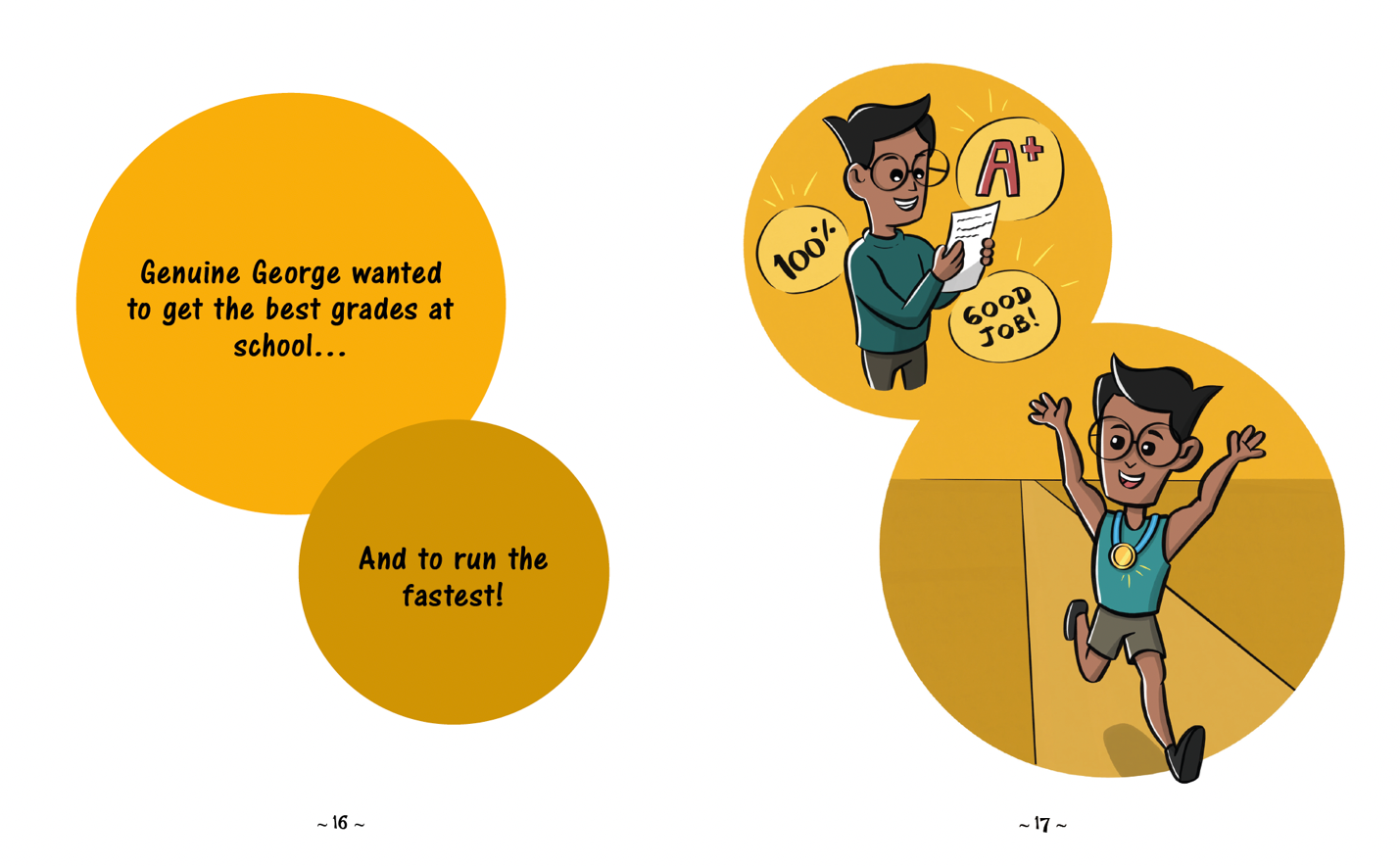 Dr Warren Farrell (The Boy Crisis) reports that worldwide, boys are 50% more likely than girls to fail to meet basic proficiency in reading, math and science. It would surprise no one that the UN finds that reading is the skill that best predicts future success worldwide. Thus, if boys aren’t reading, how can they improve and compete? Clearly, to help our boys succeed, we must get them to read. (Here we see that Bob’s dad takes the time to read to Bob every night at bedtime.) 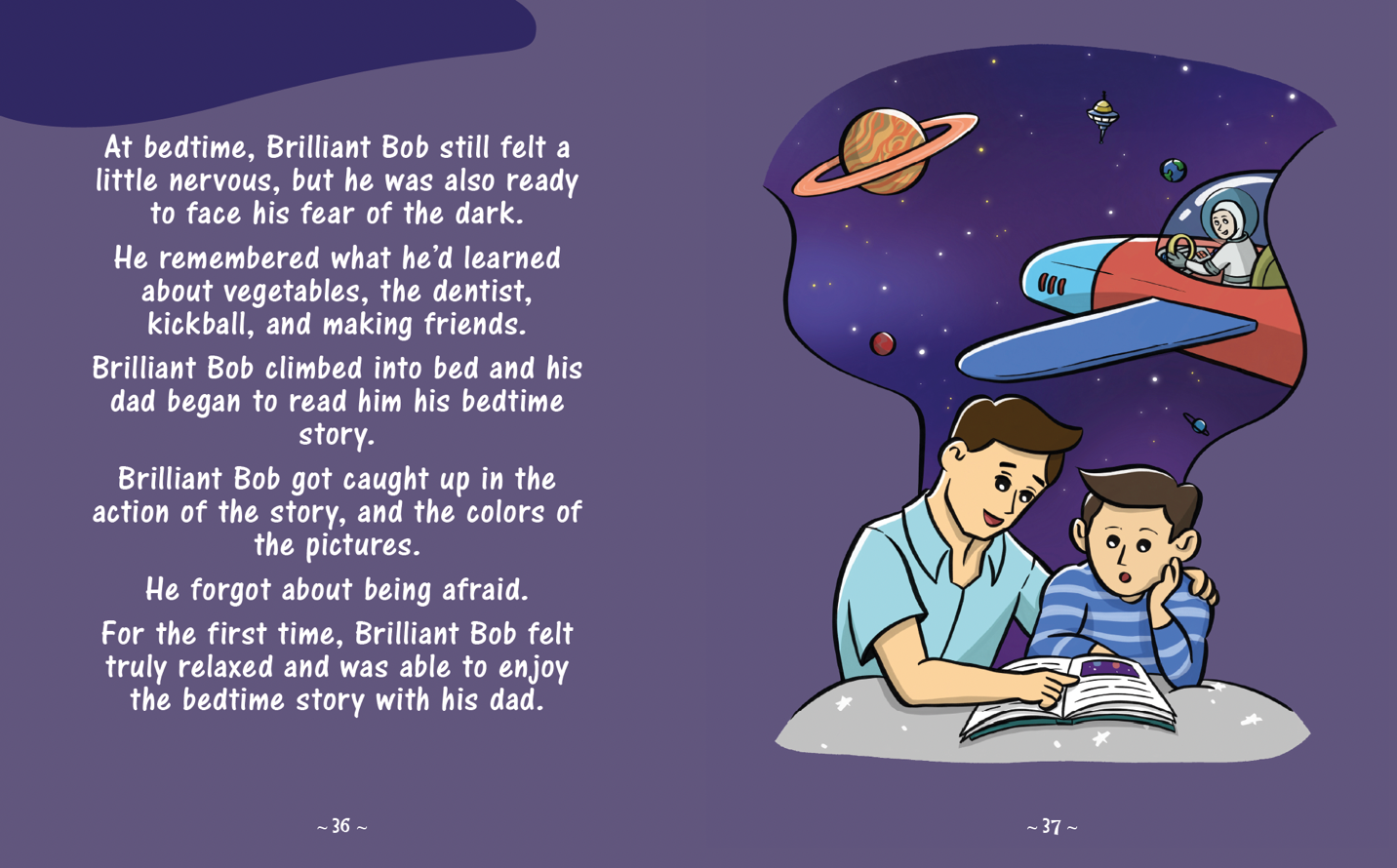 But sadly, poor reading skills aren’t the only major problem boys face. The denigration of males and masculinity (forget about wanting to take the risk to learn how to dive off a springboard as a young boy: it’s far too risky and dangerous they say) is a very serious issue today. Neologisms like man-spreading, man-splaining and man-flu are commonplace, that now the concept that masculinity is toxic is widely accepted as fact, that even politicians in congress and parliament have taken to using it as support to creating and changing laws to benefit women and harm men. Incredibly, the APA’s guideline on Boys and Men’s Mental Health Treatment has declared many traditionally masculine traits an actual pathology and Gillette postulated that masculinity is a daily threat to women. (Here we see that Bob took the risk and bellyflopped on a tough dive. But, not on the next attempt, which he nails.) 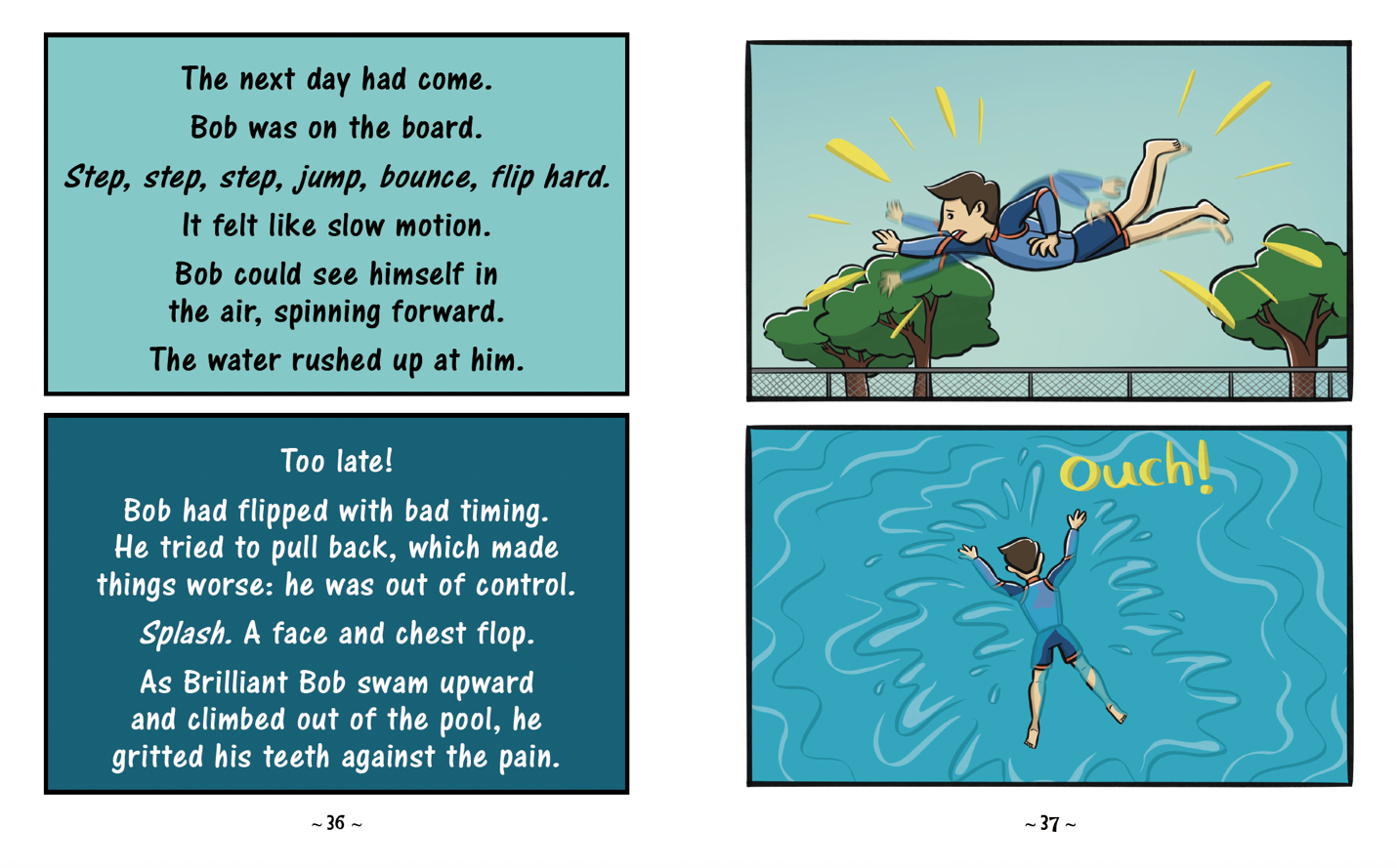 To quantify the assault on males to some degree, Dr. Jim McNamara of Australia, wrote a thesis considering over 2,000 media articles and found that 69 percent were negative to men. Men were routinely reported as villains, aggressors and perverts, which is not harmless on such a scale. Essentially, this denies boys’ role models, which is exacerbated by  fatherlessness and the dearth of male teachers in schools. McNamara goes on to warn that the “Negative stereotyping of men and male identity can contribute to significant problems in society. In the long run, such negative portrayals of men, lowering self-esteem in boys and loss of identity could lead to negative social and financial costs, namely in male health issues, rising suicides and family disintegration.” (Here we see Bob sharing the results of his willingness to be brave with his mom and dad at dinner.) 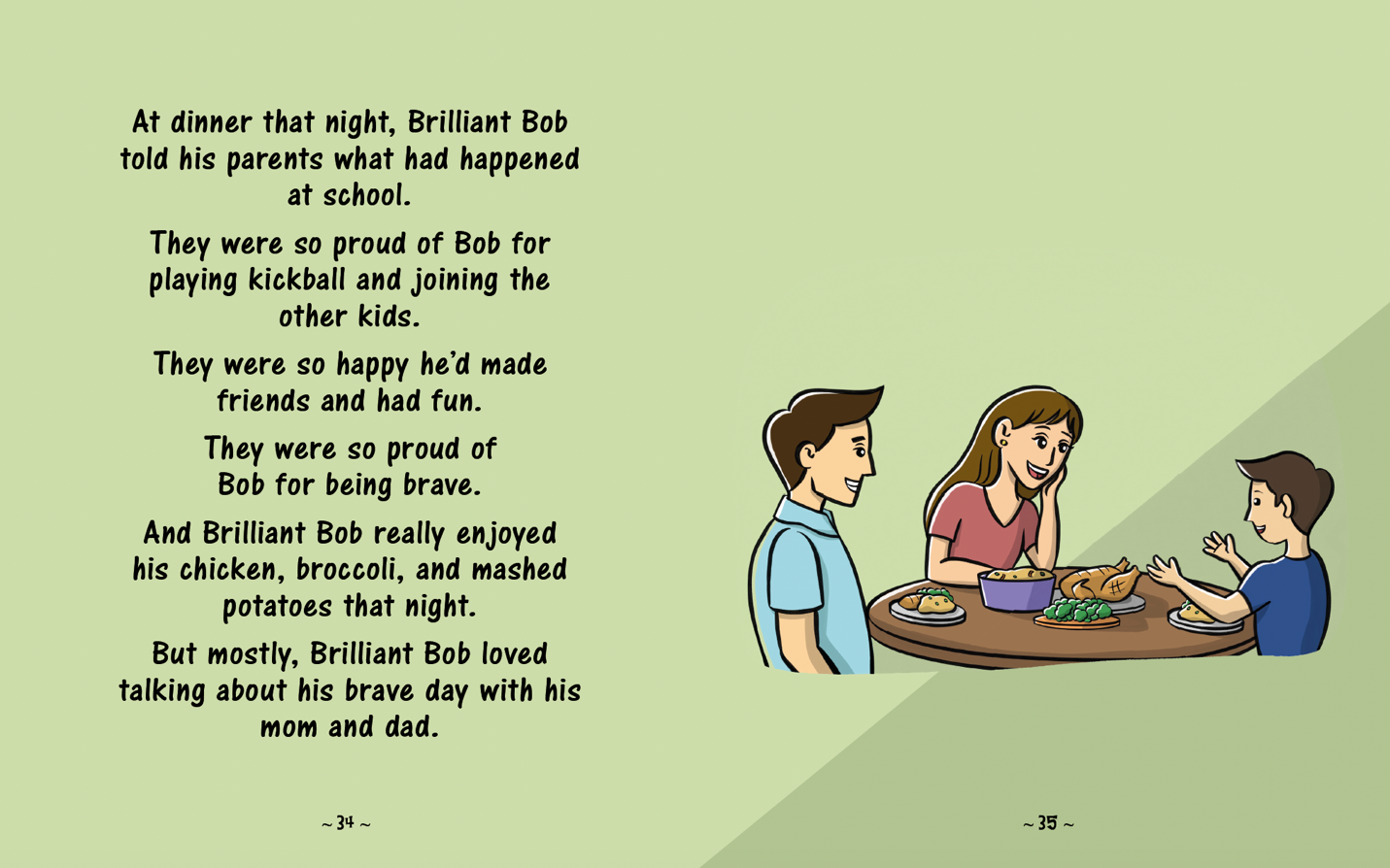 Yet it continues. Just this past March 2021, the young boys at Brauer College, Warrnambool, Victoria, Australia were told to stand up in assembly as a “symbolic gesture of apology for the behaviors of their gender that have hurt or offended girls and women”.

I think it’s clear that blaming, shaming and bashing males is very damaging because it lowers the self-esteem and the worth of boys and males. As we know, boys eventually grow into men. And damaged and battered boys who are left to feel deflated and of low worth and self-esteem will not prosper, but will instead suffer and be a drain to society and others. As Dr Farrell often reminds us, “Boys who hurt, hurt us!” And many will harm themselves through risky activities and habits, abusing alcohol and drugs and far too many males will consider suicide. Again, Dr Farrell sums it up accurately and succinctly, coining the phrase… “worth less, men considered themselves as worthless.” Is it surprising that male suicide continues to rise and is so high.

To conclude, feminism and woke ideology are colluding to make life for males very uncomfortable at best, and a driver of suicide at worst, with much suffering in-between. It’s all gone too far and must stop now! Thus, I’m countering the very damaging narrative and male bashing with messages that celebrate masculinity by showing how helpful masculinity can be to a young boy’s life. (One example being the trait of curiosity, how it may be applied and what it’s good for. Here’s what Bob learned as a result of his instinct to be curious with an old, but working bike.) 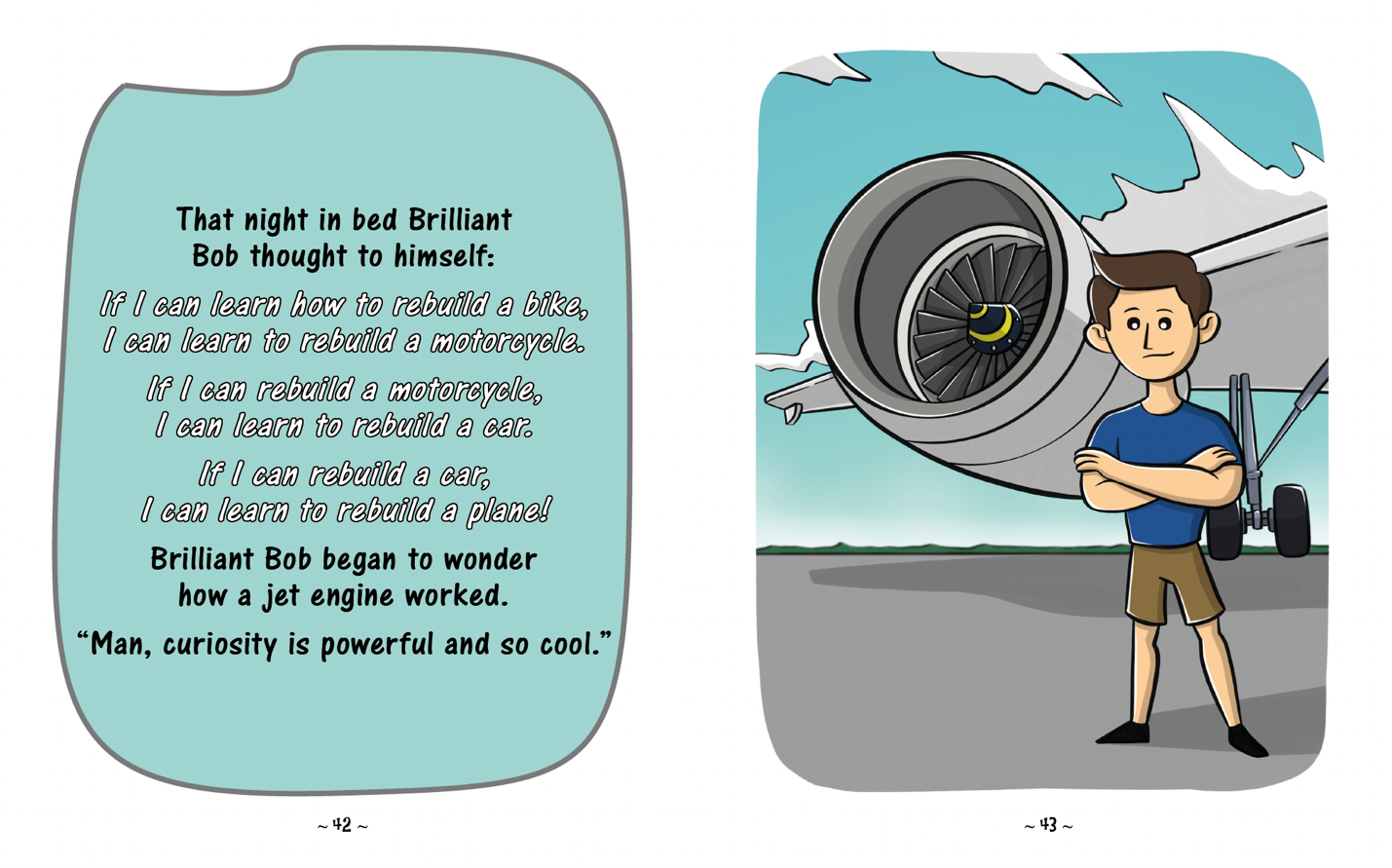 The Brilliant Bob seven book series talks about and highlights seven traditionally masculine traits (one trait is covered in depth per book), showing their benefit and application to everyday challenges, fun and life. I’ve already mentioned curiosity; the other six traits in the series include:

In my opinion, it’s a case of needing more masculinity, building pride in it, celebrating it and teaching it; not having less of it. Hence, I’m fighting back with important messages for boys in the form of kid’s books on masculinity. Books with stories and everyday adventures that will engage boys and get them to read. (Like when Brilliant Bob’s dad takes Bob and his three friends camping for the weekend and they get lost and have to camp in the wild. It’s a great opportunity for Bob’s dad to teach the boys stoicism.) 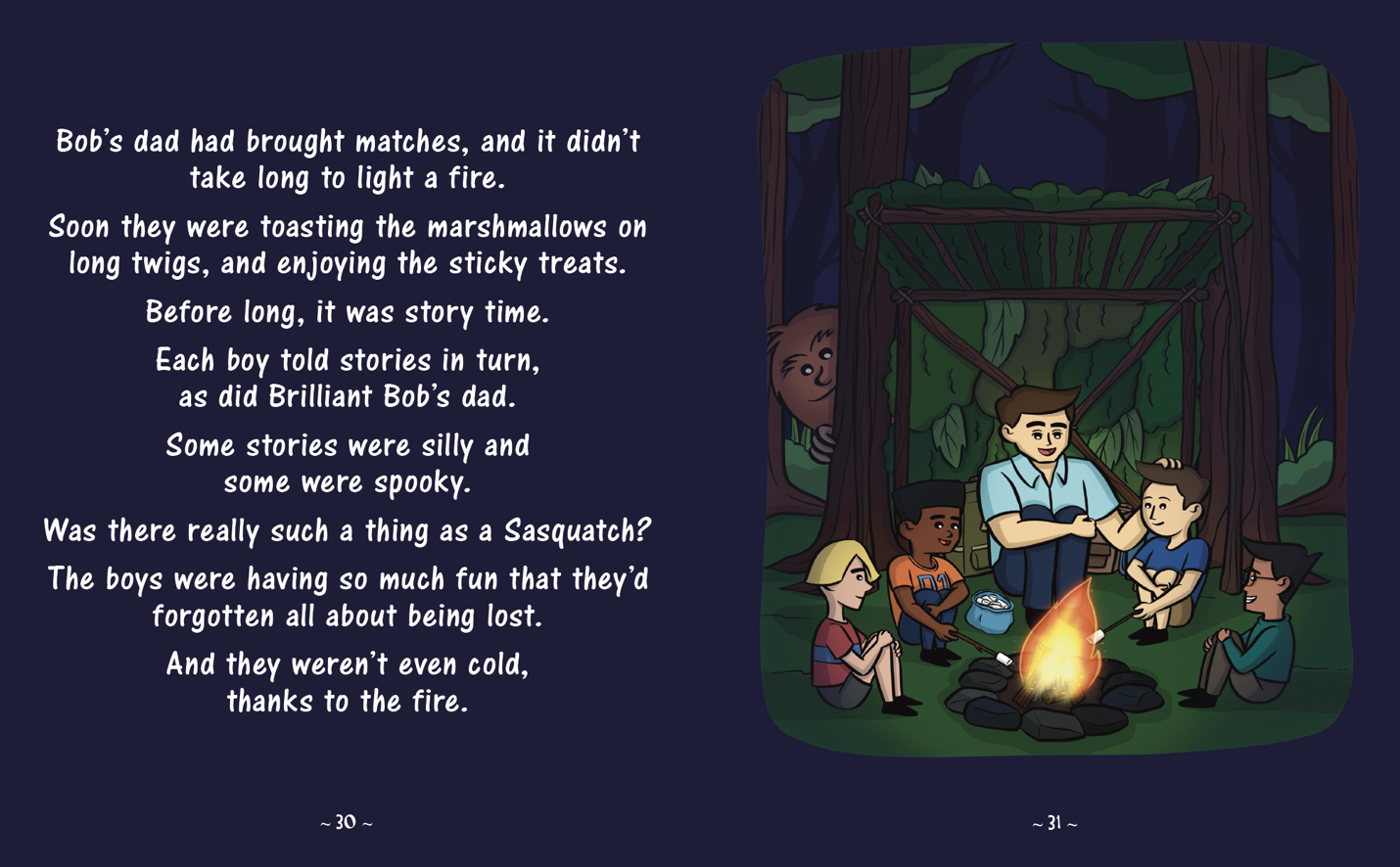 Teaching boys to read and to enjoy reading, bonding with dad and building a boy’s self-esteem and sense of male identity will in time and in numbers help combat the multi-pronged attack on males. It certainly will be a major help. Thus, I hope you’ll draw the line in the sand with me and say enough is enough. For the sake of our boys, we won’t tolerate this and we will speak up and fight back on their behalf. It starts with reading and educating boys on the truth about masculinity, and Brilliant Bob kid’s books for boys is as great a place as any to start our personal, social and political crusade to save our sons and males, as a whole.

Thank you in advance for your future support.

Kenneth was humbly raised in Virginia, one of eight kids. He attended Old Dominion University as an undergraduate in electrical engineering before enlisting in the United States Air Force (USAF). After basic and technical military training, he moved to Cambridge, England to work as an air traffic controller.

Most of Kenneth’s adult life was spent in Europe. Over the years, he has traveled to dozens of countries and has been fortunate enough to live in Brazil, England, Germany, Italy, Turkey, and Spain. Kenneth was married for 21 years and is the father of two grown sons and a stepdaughter. Unfortunately, he found himself divorced at age 43, but retired and financially secure with a military pension at 44. Thus, he set about traveling for ten years to live, learn and experience the world with open eyes.

Kenneth became a first-time author at 47, and has gone on to write several books to help men and women through relationships and important decisions. His latest passion is to help young boys develop positive identities as males and improve their self-esteem. Kenneth hopes the Brilliant Bob books will counteract the masculinity crisis in today’s society.

Locals — ​Join us and meet, discuss and post on the menaregood locals page. Become a part of the community.  ​

Tom’s book The the Way Men Heal is available now on Amazon. It offers a male friendly look into the way men heal. If you have been told you are not dealing with your feelings you need to read this book. Convenient EBook for only $4.99. or in Paperback

HELPING MOTHERS BE CLOSER TO THEIR SONS

Tom’s latest book Helping Mothers be Closer to Their Sons offers mothers a view into the secrets of their sons ways. It includes his way of handling emotions, his way of getting what he wants, competitions and much more. Great gift for mom to help her understand your sons. When we know him, we can love him! Available in Kindle EBook for only $8.95 or in paperback at 11.95.

SWALLOWED BY A SNAKE

Swallowed by a Snake: The Gift of the Masculine Side of Healing is available now on Amazon. It offers a map for men in working with their grief. A detailed look into the masculine side of healing. Available in Paperback or Ebook.