INTRO – Bias Against Men and Boys in Mental Health Research (1)

This is the introduction to a five-part series of articles about the bias against men and boys in psychological research. There is a short youtube that goes over the very tip of the iceberg of the contents of these articles. I will paste that in at the end of this post. 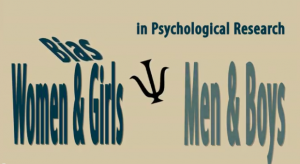 Most of us are familiar with the male bashing we see on television. Men are portrayed as buffoons and helpless ne’er do wells who consistently need others (women and sometimes children) to problem solve and do the right thing. Most people are tired of this ridiculous bias yet it continues unabated. What most don’t realize is that a very similar male bashing exists in mental health research. The past 40 years has brought us a powerful respect and admiration of women and girls. This is a good thing. The problem is that we seem unable to hold both men and women in the highest esteem. As we hold our women up we seem to tear our men down. It’s as if we can only see women as “good” and men as considerably less than good. This binary vision of the sexes gets played out in the male bashing we see on television but it also gets played out in numerous other venues including mental health research.

This collection of articles will offer you an inside glimpse into the workings of several studies and show how the anti-male bias plays out in the research. We have all grown to trust “research” and when we hear that a study shows that “X is correct“ we tend to automatically believe that “X” is correct. Research has taken on an almost divine ethos that carries the seal of approval of correctness. If science says it, it must be so. The problem of course is that science, especially social science, is less than concrete and is much more slippery than measuring a distance or the tensile strength of a bar of steel. Mental health research is much more vulnerable to values and ideologies of the researchers. If a scientist believes a certain thing it usually has little impact on his measurements of the tensile strength of the bar of steel. No matter what he believes the measurement will likely be the same. But what about issues in social sciences where researchers come to the table with a large amount of preconceived ideas, allegiances to ideologies that espouse strong opinions about those being studied or have traumatic life histories that bias them against certain groups? Can those sorts of things influence the “findings” of a social science study? You bet they can. Gone is the impartial judge weighing the evidence and sifting through the data to find the truth. In today’s world of social science research the opposite is happening: researchers are starting at their pre- conceived biases and then designing research to prove that bias. As bizarre as that sounds it is demonstrably true in some social science research. You will see some of that within this paper.

We start off with a short summary of a very important paper by Murray Straus titled “Processes explaining the Concealment and Distortion of Evidence on Gender Symmetry in Partner Violence.” Straus leads us through seven ways that feminist researchers hid or distorted the data of their studies in order to insure their results would reflect the pre-conceived ideology of females being the victims of domestic violence and men being the perpetrators. Straus’s explanations make very clear how an ideological bias can impact the results of social science research. He describes in detail exactly how they accomplished this. One technique he describes is simply ignoring your own data that contradicts your ideology. Another is to simply not ask questions that might risk obtaining answers that would contradict your thesis. After reading this piece you will have a better understanding of the ways this subterfuge has been accomplished.

The next section describes a 2009 study from Great Britain on teen violence. You will see how the researchers follow Straus’s descriptions by ignoring their own data. The original survey showed that boys were about 40% of the victims of violence but by the time the research was done and the recommendations made the ad campaign that followed was designed to help only girls and to teach the boys how to better treat the girls.

The following section features a study on “reproductive coercion.” It will show how the omission of the details about the sample of those surveyed had huge repercussions down stream. In a nutshell the study was done on impoverished African American and Hispanic females. This fact was not reported in the research article, nor reported in the press release, and never showed up in any of the national media articles that followed. It is well known that interpersonal violence is about three times as likely in an impoverished population. By omitting that little bit of data, that the sample was largely impoverished women of color, the ramifications of their study changed drastically from one that applied only to a poor population of women of color to a study that applied to the population at large. This shift resulted in millions of people reading about the study in the national media and being led to believe a message that simply wasn’t justified by the study itself.

The last section looks at the Conformity to Masculine Norms Inventory (CMNI). This inventory claims to measure men’s degree of conforming to what it calls “masculine norms.” There are multiple problems with this inventory but the most obvious is its choice of very negative descriptions for what masculine norms are in this culture. The norms include such descriptors as “Violence” ”Disdain for homosexuality” ”power over women” and ”playboy.” Simply by choosing these words to describe men in this country is misandry. This is male bashing. There’s more.

It’s important to see the ways these studies try to influence the public and promote their own ideological biases. Each of these studies was done by researchers who appeared to have strong ideas about men and women and their research conveniently harmonized with their pre-conceived notions. With “science” holding so much power and ability to sway opinions it is critical that we watch carefully how the social sciences use their studies to proliferate their own ideological viewpoints.

The spreading of misinformation has a very negative effect on the population at large but there is no place in more danger of this than in the halls of congress. Our legislators are easily influenced by studies such as those described herein and the likelihood of laws being written based on one sided viewpoints becomes alarmingly high. To make matters even worse our legislators are largely unaware of their own unconscious chivalry and combine that with hysterical research that claims damsels in distress need funding and what you see is billions of taxpayers dollars being spent in a very questionable manner. Combine these studies with the media, and then the blogs and you get a system that is fed by erroneous data that accepts it as fact and acts on it. One needs to only notice the fact that great majority of people in the US are convinced that women are the sole victims of domestic violence to understand the power of the media and particularly the media in combination with “studies” that are used more for propaganda than for gaining an understanding of the truth.