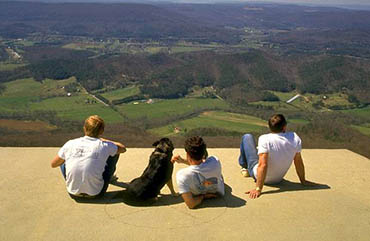 Do boys face sexual abuse as children? According to research the answer is a very powerful yes.   A CDC study in 20051 showed that 1 in 6 boys experienced unwanted sexual contact by the time they reached the age of 18. The number for girls was a bit larger, it was 1 in 4.  So 25% of girls and 16% of boys were reported to have had unwanted sexual activity prior to the age of 18.

I am sure that some of you are wondering exactly how the question was worded in order to get to those numbers.  We live in an age where definitions have become so watered down that statistics really don’t tell the story.  So for those of you who are wondering let’s look at the exact wording. This is taken directly from the journal article:

This wording seems fairly straightforward and accomplishes the important task of not using the word abuse.  We now know that males have been reluctant in the past to answer that they have been abused because males often times simply don’t see their experience as having been abusive.  One study6 used a sample of children, both boys and girls, who DHS had defined as having experienced childhood sexual abuse.  Of that group only 16% of the boys thought that they had been abused. You can compare that to 64% of the girls who thought they had experienced abuse. In this sample four times as many girls who had been designated as having experienced sexual abuse as children believed their experience was “abuse.” Only a fraction of the boys felt they had been abused even though they had a similar experience. This has likely been a factor in some previous research showing that boys were less frequently sexually abused as children.  Simply using the term “abuse” in a research questionnaire would throw off the numbers. Things seem to shift drastically when you only ask about the exact experience and not label it as abusive.  This study shows that when you do ask about specific experiences the boys and girls have similar rates of abuse.   The men and boys will answer the questions honestly, it is simply they have a different view of the word “abuse.”

The idea of 1 in 6 boys having been sexually abused as children is not limited to this research nor is it new. There are a number of other  studies that have come to very similar conclusions. (See references) The range seems to be between 14% and 18% for the boys. We knew even in the 1980’s that boys comprised a sizable number of those children who experienced sexual abuse.  The classic and best selling handbook for female survivors of childhood sexual abuse “The Courage to Heal” estimated that 1 in 7 boys faced the trauma of sexual abuse as children.  The book, like so many other media sources focused almost totally on female victims.

The idea of 1 in 6 has become so accepted there is now a web site 1in6.org that offers information specifically for boys and men on childhood sexual abuse.  It provides a place for men’s stories about their abuse, has information for the men, their family members , therapists and professionals.  It is well worth a look. I think it’s a breath of fresh air.

The study also examined the life impact of their childhood sexual abuse.  It found that both boys and girls were negatively impacted in a similar manner.  This also challenges some of the old assumptions that it was the girls who were abused that faced the greatest hardships/trauma and negative life impact due to their abuse.  This study says that is far from the truth.  They conclude that both boys and girls are impacted and the impact is very similar for both.

I am grateful to these researchers for their even-handed examination of this problem and their ability to ignore the status quo politically correct version that focuses on girls who are victims and ignores the hardships and needs of boys.  They take a very important stand on this issue as can be seen in their conclusion (emphasis is theirs):

In conclusion, the data presented provide important implications for public health and preventive medicine. First, childhood sexual abuse is a common
form of childhood maltreatment in both men and women. Second, childhood sexual abuse and severity of the abuse have a similar relative impact on behavioral, mental health, and social outcomes for both men and women survivors, as reported during adulthood. Moreover, it was demonstrated that female perpetration of CSA upon boys was common (40%), and increased the risk of behavioral and social outcomes among male CSA victims.

The Title of This Article

I do have one bone to pick with this research. It has to do with one of the tables of data they offer in their article.  Table 2 on page 433.  Here’s a graphic of that table: 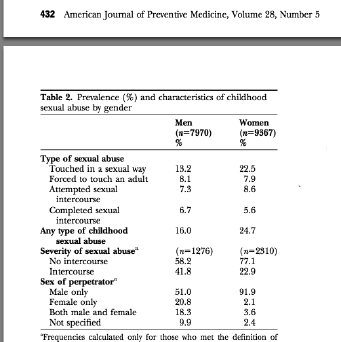 Notice that this table separates the male numbers from the female numbers of those who experienced childhood sexual abuse.  A quick look at the table shows that a total of the various types of abuse sum to 16% of males and 24.7% of the females.  Okay.  But look at the numbers for the least intrusive sexual abuse.  This is the category that one would assume would be the largest for both boys and girls with declining numbers to follow.  But what you find is that  13.2% of the boys experienced this lowest level of abuse and 22.5% of the girls experienced this lowest level of abuse. Still not a problem but obviously the girls experienced much more of the least intrusive type of abuse.  But look what happens with the more severe abuse.  In the next category “forced to touch an adult” the boys outnumber the girls, 8.1% to 7.9%. Then in the next level of abuse of attempted intercourse the boys are 7.3% and the girls 8.6%.  But it is the last most abusive category that got me wide eyed.  In this category of completed intercourse the boys outnumber the girls 6.7% to 5.6%!  This seems to say that more boys then girls were raped as children.  That is a notable statistic.

My beef with the researchers is they didn’t highlight this difference and question the reasons for such a startling stat.  It was basically glossed over. While I deeply appreciate these researchers focusing on boys and showing they need and deserve compassion. And I really appreciate their focus on boys being just as negatively impacted by their experiences of sexual abuse.  I just can’t forgive them for not putting this stat into their discussion and pointing out that their data indicates that boys are more often the victims of severe sexual abuse as children. The more severe the abuse becomes the more boys and girls are in equal numbers with boys being slightly more likely to experience the worst types of sexual abuse.  That is what their data says and that is a very powerful message that might wake up some of both our slumbering psychological professionals and the general public. The least they could do would be to get a discussion going about the reasons that boys outnumber girls in that most intrusive category.

The popular percentages of 16% of the boys (1 in 6) and 25% (1 in 4) of the girls having experienced childhood sexual abuse is a bit misleading.  The standard 1 in 4 girls are sexually abused may be technically correct but I think it misleads a bit especially when it is compared to the 1 in 6 of the boys.  It makes it look like many more girls face sexual abuse.  The fact is that many more girls do face the least intrusive category of sexual abuse, nearly 1 in 4.  All the while about 1 in 8 boys faces this least abusive category.  But when you only look at the more severe forms of abuse the numbers change.  Now for both boys and girls it is more like 1 in 14 with slightly more boys experiencing the most severe forms of sexual abuse.

I don’t want to minimize the impact of the less severe forms of sexual abuse but at the same time I think it is vitally important to insure that the fact that both boys and girls are equally susceptible to the more severe forms of abuse gets into the public knowledge base.  Our media has painted a picture over the last 40 years that girls are the real victims of sexual abuse in childhood and men are the primary perpetrators.  If you think about your own perceptions I would bet that you would go along with those ideas. We have gotten only half the story from the media. When you only know half the story you carry a potent bias.  It leaves us with a disinterest and even a disbelief in the pain and hardship that boys face.

Just imagine that our media was biased in the opposite direction.  Just imagine they were much more interested in the hardships that boys face and preferred to ignore the hardship of girls. How would they go about taking the findings of this study and promoting their bias? A media like that might produce the following headlines: 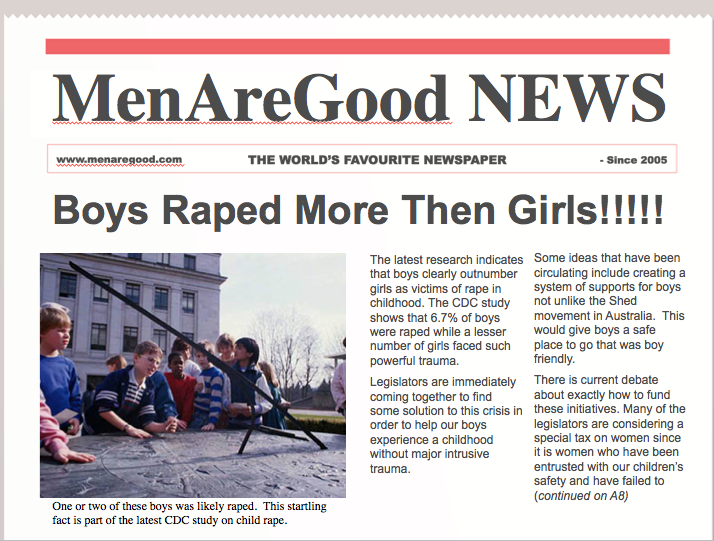 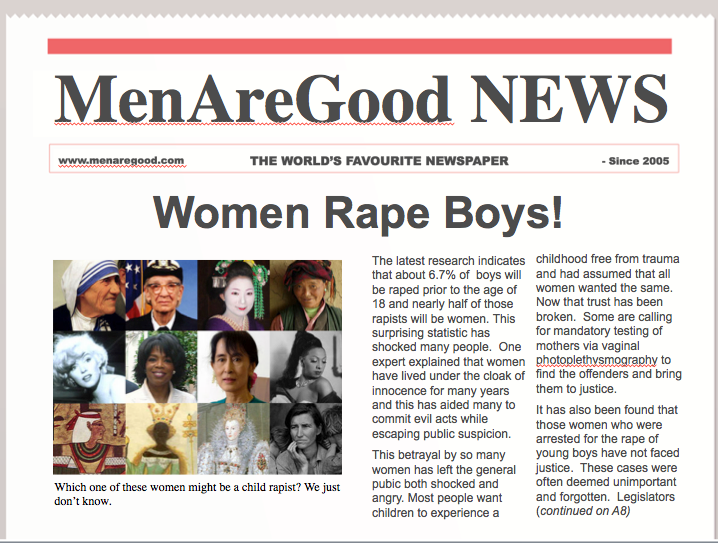 These headlines show what a biased media might do if they were only concerned about the needs and hardships of boys and men.  We have had nearly 50 years of the opposite: a media that is only concerned about women and girls. The above headlines don’t lie, they simply only tell half the story.  This engenders a very false image in the minds of their readers.   We have all been duped.  Most people believe that women and girls have a corner on the market of hardship and discrimination.  This is a completely false message as can be seen by the research discussed in this article.  We need a media that shows compassion and interest in the needs and hardships of boys and girls.  Not just girls. This research study is a good example of the beginnings of this sort of thing.

And let’s not forget, Men Are Good!

Tom Golden, LCSW is a psychotherapist in private practice.  His office is in Gaithersburg MD.  Tom also does consults via the internet and phone.  His newest ebook “The Way Men Heal” offers a quick look at the masculine side of healing. You can find him here: [email protected]

References (these were taken from the 1in6.org research page https://1in6.org/the-1-in-6-statistic/)