Excerpt: Swallowed by a Snake, the Dagura People 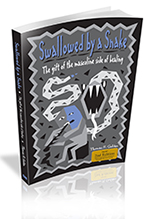 This  is an excerpt from my first book, Swallowed by a Snake.  It offers a glimpse into the workings of the Dagura People in Africa and the way they heal from loss.  It was this group and many other indigenous groups  which opened my eyes many years ago about the important differences in men and women and the ways we heal.   See what you think.  (pgs 124-126)

We now turn to another example of indigenous grief rituals, that of the Dagura people of Africa.28 When a death occurs the women of the village begin to grieve. Their grief is somewhat muted, however, until the men have ritually announced the death. This announcement cannot occur until the men have created a “sacred space” for the grief of the village to emerge, and no man is allowed to show signs of grief until after this ritual space has been created. This is done by invoking the aid of the spirits through a private ritual performed only by the men. The invoking of the spirits is partly designed to elicit enough grief from the mourners to allow the dead person to move into the world of the ancestors. The Dagura believe that the soul’s journey into the next world is dependent in some ways upon the grief expressed by the mourners. Without adequate grief, the soul is thought to be stuck on this plane of existence and unable to leave the world. They have thus connected their grief with a purpose, that being the birth of the soul of the newly dead. The creation of ritual space, a safe container for the expression of grief, is seen as essential to the birthing of the spirit of the person who died. A part of this creation of sacred space involves throwing ashes around the house of the deceased and the ritual preparation of an actual physical space for the grief ritual. The announcement states that there has been a death, the ritual space is ready, and it is now time to grieve.

The grief ritual itself is complex and beautiful. The grieving space is divided into different sections. The body of the dead person is dressed ceremonially and seated on a stool in the section called the “shrine.” Two women elders are seated next to the body and are charged with the duty to collect the grief that is being expressed and to “load it on” to the dead person to help him or her in the journey toward the ancestors. The shrine is colorfully decorated and contains some of the important possessions of the dead person. There is a boundary around the shrine which symbolically marks the separation between the living and the dead, and outside of the two women tending to the body, no one is allowed to enter the shrine, for to do so would mean entering the realm of the dead.

Between the shrine and the mourners is an empty space that represents chaos. Within this space people are allowed to express any form of grief they want, as long as it is related to their feelings about the death. Crying, dancing, or any expression of emotion is accepted and expected to take place within this space. There are people who are designated as “containers.” These people are often relatives who have come from afar. Their job is to insure the safety of the space for the grievers, making sure that no harm comes to those who are actively grieving. The Dagura believe in releasing grief with all its intensity, but they have also developed a system in which the intensity does not exceed the capacity of the mourners. It is like a system of checks and balances. The containers follow the grievers as they mourn and if they stray out of the ritual space, will gently tap them on the shoulder to remind them to come back into the contained space.

On one side of the shrine are the men of the village and on the other side are the women. Each group consists of mourners and containers. The mourners are further divided by the “kotuosob,” a small piece of rope tied around the wrist of the griever. The rope designates a person who was particularly close to the deceased, perhaps a family member. This marking alerts all the participants that someone who is wearing the “kotuosob” is what they call a “center of the heat” person, that is, a person who is more likely to be in danger of “grieving himself to death.” The Dagura see grief as food for the psyche, necessary to maintain a healthy psychological balance. But they also see its danger—too much grief and a person will “lose their center” and, they believe, can grieve to death. Thus the Dagura designate specific containers to follow closely behind the tagged person and do exactly as they do, including dancing, jumping to the beat of the drum, or pounding the ground. Sometimes when a tagged griever is experiencing a great deal of grief, a group of containers and mourners will form a line behind him or her with each person in the line doing the same action as the primary griever. It is understood that this transmits the feeling of the primary griever into all of those down the line. This type of process is viewed as a form of silent and physical support to the person who is grieving. It is important to point out that among the Dagura the healing of grief is gender specific. That is, no woman will approach a man in trying to help him with his grief, and no man would do the same for a woman. They believe that it takes a man to help release and heal the grief of another man, and a woman to reflect the grief of a woman.