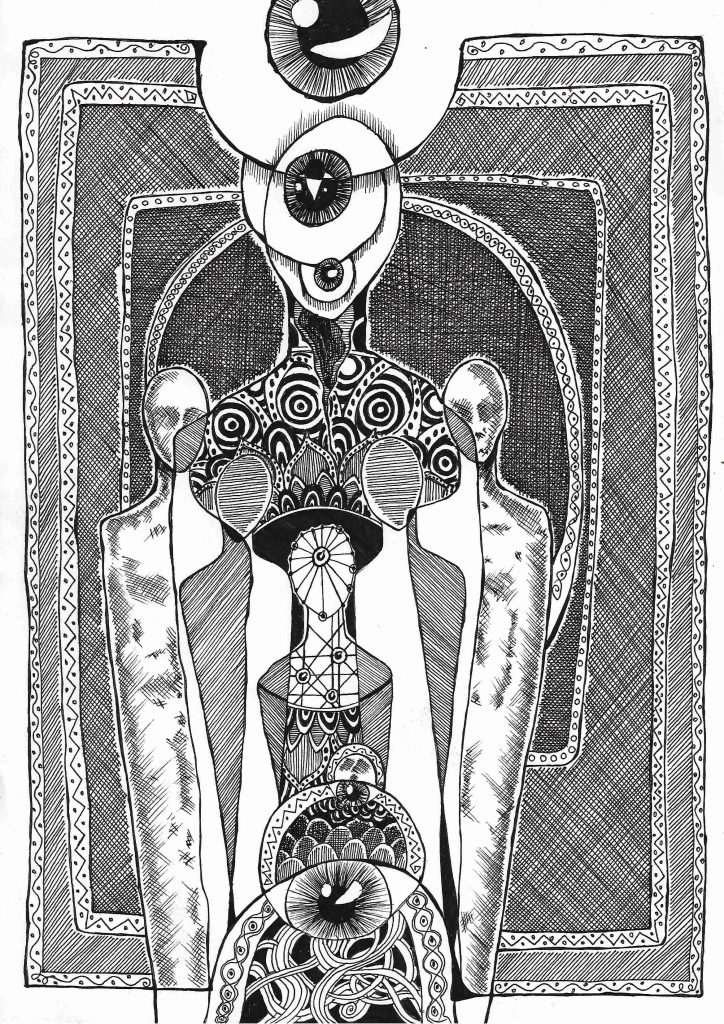 Well then, since Tom has very kindly lent me the keys to his kingdom (which is to say that he has got me chained up in his basement, forcing me to write for scraps), I thought introductions might be in order.

I’ll do my very best at keeping this introduction short and to the point. This, to my nimble fingers and burlesque-dancing mind, of course translates into making it long and pointless. Not for lack of trying, I swear – my keyboard has a mind of its own, and so it tends to run away with me.

At the time of writing, I am 35 years old. Norwegian. Became a father for the first time about seven months ago. Been identifying as a non-binary translucent jellyfish since about 2016, ever since FaceBook allowed one to write whatever the hell one wanted to as ones gender identity. Obviously, I did this as a joke, expecting someone to comment something about the ridiculousness of it all.

There were no comments about this sudden sex-and-species-change of mine, and so I did what any reasonable human being ought to do: I cried hysterically for about three days straight, and then decided that the time was nigh to start writing something about the ridiculous state of things such as things are.

Memory may be fuzzy on the origins of the MRA-label, though. This is the internet, and so the true history of anything that is primarily online is hard to come by.

Now, the non-binary translucent jellyfish thing is not the main reason for me writing about this men’s rights stuff; this anti/non-feminist stuff. A shitload of negative personal experiences with feminism and the “women and girls first” mentality, both in school and in the private sphere has not exactly given me the greatest of opinions on this supposed force for equality. Preferential treatment (and all the other so’s and suches the feminist movement pushes into being under the guise of equality between the sexes) is not, oddly enough, what I would consider equal treatment. Imagine that. Nor do I believe that political indoctrination – that is force-feeding children feminism in schools as the one true movement that holds the monopoly on all things sex-and-gender and equality – is a good, honest, decent, noble or just thing to do.

That is precisely what was done when I went to school.

I have been sharing some of my stories from that time on my various channels online. Not an easy thing to do, because it gets to become very personal; something that I share reluctantly for very pragmatic reasons. I derive very little pleasure from putting my personal experiences online, for all the world to read, mock, ridicule and dismiss. People, by and large, do not believe these experiences are true. Or do not want to believe them. That is to say: choose to not believe them. This disbelief I considered to be interesting, irritating and infuriating. Until, that is, I went back and looked at it from a top-down perspective, rather than a first person perspective and realized that, yeah, it really is hard to believe. And that is precisely the problem.

I mean: whether people believe it or not, it is still true – these are still things that happened, and no amount of doubt, head-shaking and shaming-language will change that.

Being in this position – the MRA-position – does not exactly lend itself easily to the popular vote. Not by a long shot. Many are the times which I have been told what a horrible, lying, woman-hating, patriarchal oppressor, misogynist, white supremacist, fascist, incel, right wing extremist, enter-your-preferred-momentary-buzzword-of-shame-and-shutdown-here that I am for daring to imply that boys and men should, perhaps, be treated well – at least better than the current social zeitgest allows them to be treated.

As such, lying through my teeth would not exactly do me, or the loosely knit “men’s rights” movement any favours. When there is little to gain by telling the truth, there is even less to gain by telling lies. Some things, some stories, need to be told and need to be shared. In the future, I believe that it will pay off. I hope more men come forward and share their stories. The language of the day is one of anecdotal experience; of personal trials and tribulations. This is what the feminist hive-mind chose it to be. At least for women. That is to say; for feminist women. Non-feminist women need not apply, as they will be booted out of the transcendental story-time-telling by the subtle application of the very same type of evil and wicked harassment, bullying and pile-ons which the feminist hive-mind have deemed to be the misogynist tactic of foul penis-wielders everywhere, whenever a woman dare say anything online. Psychological projection; thy name is feminism. This psychological projection, one assumes, explains why they believe me to be lying. Or to, at the very least, be a hipocryte of the highest order.

It is only fair, true, just and – he he – equal – that men share their stories, their lived experience, as well. In the future, it will pay out. In the meantime, I suppose us in this loosely knit movement need to take care so that we can withstand the slings, arrows and various and sundry.

Considering, however, that misogyny is supposedly a hate-crime now – or on the path to becoming one – and that misogyny is whatever the fuck any feminist says that it is at any given moment, it would not surprise me to learn that we will all soon be outlaws. This, of course, has a certain dangerous and – dare I even say it – romantic appeal to it, which I believe will work against the very ones that pushed for these horrid soggy knees to be considered a hate-crime in the first place. Everyone loves a rebel, whether they admit to it or not.

And so I wear the label of a “rebel” like a badge of honour on my sleeve.

I plan to have a ramble written for menaregood.com once a month. These rambles sometime take the form of lyricism, prose, poetry, whatever you want to call it. I guess no amount of disillusionment with the world of art can remove the artsy-fartsy stuff from the artist.

I studied art for two years, you see. During these years, I met my wife and was subsequently told by the teachers at said school that I was oppressing her by forcing her to not socialize with the rest of the school. We are both highly introverted. Not that this matters – the feminist had spoken, and so the truth was whatever feminism said, not what the truth in actuality was.

This started an avalanche wherein I was frozen out by the teachers as well as the students at this school. Feminism, not art, was the language spoken at art-school. Interestingly enough. But that story is also told elsewhere, in great depth and even greater detail. Suffice it to say that I refuse the label of artist, and instead refer to myself as an artisan. If I have to refer to myself as anything at all. But that is besides the point – the point is to say hello, write a short introduction and hope that you will enjoy whatever it is that I put up on this site. Please check out my books, should you wish to support my work, and have a good one.

Moiret Allegiere (Born 1986) hails from Norway. A self-described scribbler of lines, juggler of words and weird pseudo-hermit, he became so concerned with the state of the world that he left his long and deliberate hibernation to wreak bloody havoc on the world of fine art and literature.

HOWLING AT A SLUTWALK MOON

BUT YOU WILL NEVER GET MY LEATHER JACKET

FOR THE SAKE OF MY BEARD

For the Sake of My Beard Available on Amazon HERE

HOWLING AT A SLUTWALK MOON VOLUME 2

Howling at a Slutwalk Moon Volume 2 Available on Amazon HERE

FEMINISM: THE BREAKFAST OF CHAMPIONS (AND WHY I AM FASTING)

Feminism: The Breakfast of Champions (and why I am Fasting) Available on Amazon HERE