Review: The Red Pill Movie — compassion and choice for men and boys

{Disclaimor: I played a small part in the Red Pill Movie so I am sure that impacts my review. I was able to see a screening in Fairfax VA on November 1, 2016.}

The Red Pill is an amazing documentary that accomplishes an incredible task. It portrays men as human beings who deserve compassion and choice.

It first helps the viewers to see that those bringing the message of men needing compassion and choice are not women haters, not Neanderthals and not unloving oafs but are people who are concerned about the humanity of both men and women and have already taken the red pill. These folks know that men, like women, are deserving humans. People like Elam, Farrell, Pizzey, Crouch, Esmay, Hayward and Angelucci all are shown not as oafs but as caring people concerned about the humanity of men and boys.

With that task started the harder work begins. The work of showing that men and boys face hardship and discrimination and fail to engender compassion from the vast majority of our culture.

The film accomplishes this by describing the inhumanity that men and boys have experienced and the concerted societal effort to ignore their suffering. It succeeds in doing this through graphics, through talk, through human stories and through statistics. It powerfully builds the case that men and boys are silently suffering in a world that sees the needs and pains of women and girls as a call to action and the pain and needs of men and boys as something to ignore. The message and theme of men’s disposability is gradually brought to life along with men’s issue after men’s issue that is driven home with undeniable statistics and powerful personal stories.

All of this likely leads to an audience that is unsettled at best. Their blue pill comfort is being shaken and challenged. Two opposing elements come crashing together. On one hand, the viewer’s worldview has likely been that men have it all, have all the power and privilege and don’t need/deserve special help or even compassion. But on the other hand they are now in the midst of seeing the Red Pill message which is elegantly and honestly challenging that worldview by exposing the hardships of men and boys and how that is very often ignored. The unavoidable dilemma is that the viewer realizes they too have been a part of this global ignoring of male pain. These two opposing forces can’t coexist. Something has to give. This is where Jaye truly shines. She seems to have predicted the audiences’ angst response and gives them a balm: she tells them about her own ambivalence, her own disbelief and struggles, and her own discomfort with this new vision of men. She intersperses what she calls video diaries throughout the film and they show her process over the 2-3 years of filming of slowly struggling with the red pill and how hard a thing this is to swallow. I am certain that most of her audience is having the exact same ambivalence, disbelief, and discomfort that Jaye so aptly portrays in the video diaries. This gives them a model, another human being who has a similar struggle. My guess is that having Jaye as a model in these video diaries makes their task of incorporating such a large dose of new information that contradicts their beliefs a bit easier. When they see a very attractive young blond feminist who is openly questioning her own previous beliefs it normalizes their own experience of the same. The audience is at a disadvantage since they do not have 2-3 years to process, they only have the less than 2 hours of the film. Dissonance. My guess is that the end product of the video diary approach is that it helps the audience swallow and process a bit of their own bias. It likely softens things a bit and it does so in a way that facilitates their feeling stunned and minimizes their rage and anger. Being stunned breeds discussion and questions of oneself and others, being furious tends to breed separation and denial.

There will be plenty of folks who can’t psychologically tolerate the message of the Red Pill even with the helpful video diaries. These folks will likely be furious after seeing the film. That is both fine, expected, and welcomed. Better furious than ignorant. Cassie Jaye has given them a good shot to come out of it with questions and feeling at least a little more intact. I’m sure their mileage will vary based on their own level of personal development. 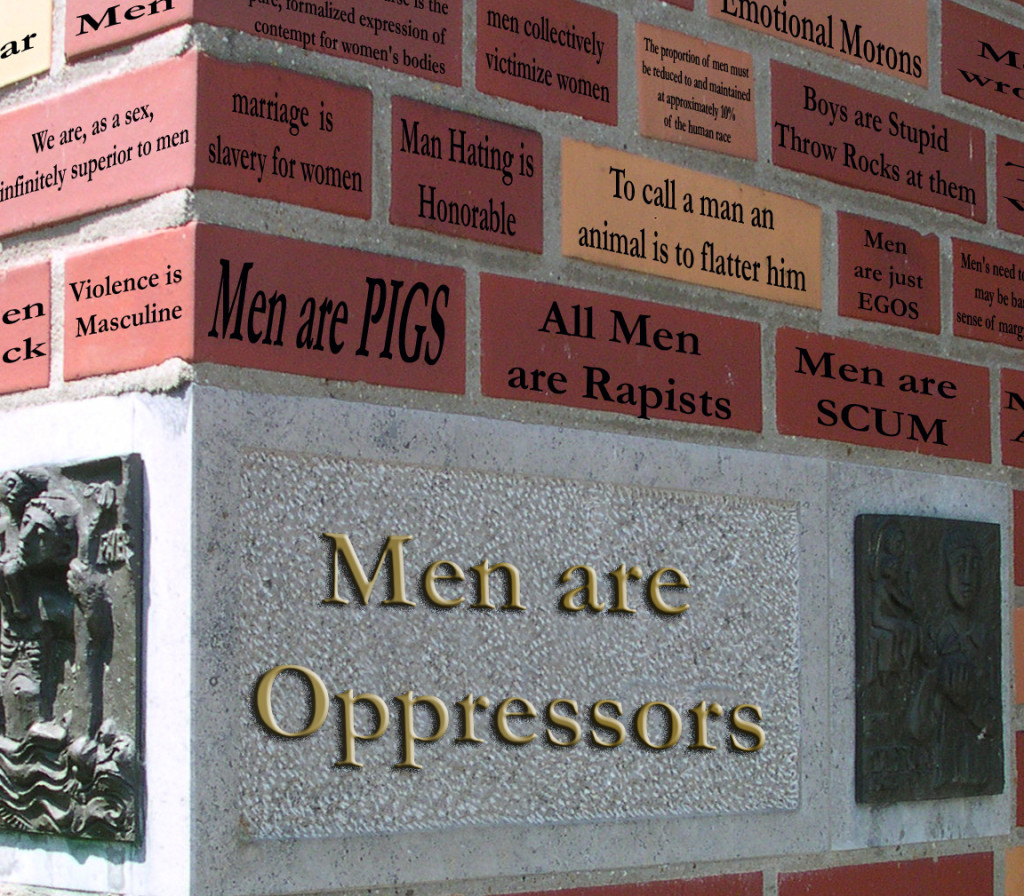 Jaye also interviews feminists. Quite a few of them. Their words likely grate on the viewer’s psyche due to the viewer’s brand new realization of some men’s issues. The feminists tend to disregard men and boys and overtly contradict the very thing the film has been teaching. When you have seen clearly how men and boys are getting very little compassion it’s much easier to see the stark contrast of the feminist message of blaming men. It makes it very easy to see how their feminist world view is myopic and severely limited. Perhaps an even larger impact on the viewer came from the scenes of protestors trying to keep men’s issues from even being discussed. And then there was Big Red. The people I spoke with after seeing the movie unanimously referred to Big Red as extraordinarily enlightening to the hate that exists. The clips of the protestors and of Big Red were very effective in helping the viewer to understand the depth of their hatred and misandry.

The protestors chanted such hatred as “Fuck Warren Farrell.” They accused him of being a rape apologist, a misogynist, and pulled fire alarms to sabotage his talk. What was the issue they were so enraged over? Farrell was to talk on boys and suicide. Boys and suicide.   Knowing this it becomes clear that their upset was likely not about Farrell but more related to simply wanting to stop anyone from discussing men’s issues such as boys and suicide. That is a forbidden topic to them. Why? Because it challenges their worldview and they will have none of it and will do what they can to stop it. They are like flatworlders who attacked those who said the world was round. This is obvious in the film but what I want to point out now is that we are seeing the exact same dynamic from people protesting this film. Watch the movie and see that it is only about men’s and boy’s issues. That’s it. But the protests of the film, like the Farrell protestors,  are not about the content, they are personal attacks on the cast and on the director. Watch the reviews, or the attempted bannings of this movie and you will see this dynamic repeated over and over again. The worldview is challenged and the response is to make personal attacks, just like “Fuck Warren Farrell” or now “Fuck the hateful misogynist Red Pill”.   It is obvious to even a casual observer that what is driving this frantic screaming has nothing to do with the cast or the director or even the content of the film and has everything to do with the protestors’ lack of compassion for men and boys and their fear of anything that might negate their feminist ideology. Here’s a tip: when you run into someone attacking this movie just ask them if they are having a hard time having a little compassion for boys and men. That cuts through to the reality of their upset.

The film flowed easily for me. In its nearly two hours time I never looked at my watch and was engaged in the flow on screen. So many issues were presented clearly and accurately. I was especially moved by the section on circumcision. I wont’ spoil it for you but will just say that is was a powerful use of cinema to get a message across and will likely open many eyes about the barbarism of circumcision and the default disregard for the pain and trauma of little boys.

I loved this film but if I had one nit to pick it would have to be the omission of the role of gynocentrism. The film does a great job of showing that men and boys have faced difficulties and their problems have been ignored but it fails to help the viewer understand why this might be. Yes, feminism is a problem but the question is what is fueling feminism? Why has it been so successful? Why has it been so easy to over run the needs of men and boys while tending to the needs of women and girls? The answer lies in gynocentrism which has been around for eons as compared to feminism which is a newcomer and basically a parasite of gynocentrism. In a nutshell, gynocentrism is about providing and protecting women and children at the expense of men. You know, the old “women and children first” meme. This is not a totally bad thing since it has been what has built our culture and many others for thousands of years. It does however impact our interest in women’s issues and our turning away from men’s issues. If you are curious about your own degree of gynocentrism you can try an exercise here. If you want to learn more about this I wrote an article Gynocentrism 2.0 that goes into much more detail. (or a youtube video here) Maybe the next documentary will explain this in detail.

Jaye has had the guts/balls to make this film and tell her story, the men’s story, the feminist’s story and let it all stand on its own. When she interviews both MHRA’s and feminists she doesn’t take sides, she lets people talk. She doesn’t interrupt or challenge or try to change minds. She just listens. Through most of the film she just puts the story into the film. This is a gift to the viewer. I can’t tell you how grateful I am to her for this. When you see this movie you will likely join me in that feeling and importantly, will be left to decide on your own.

Thank you Cassie Jaye for having the courage to make this critically important film. Thanks too for the unmistakable message that underlies the Red Pill:  Men Are Good!