The Everyday Hatred of Men: Part one, Patriarchy

(this is the script for the first video in a youtube series that I just completed on the Everyday Hatred of Men.  The series examines Patriarchy, Toxic Masculinity, Hegemonic Masculinity and then concludes with some ideas about why the hatred is allowed to stand. I will be publishing these here in order.  If you want to skip ahead and see the entire series you can see them here. TG)

Rarely in nature do things go just one way. We live in a world that is filled with complexity and subtlety. And yet, when it comes to men we see three popular theories that are horribly one sided and hateful. The feminist Patriarchy theory, the academic hegemonic masculinity theory and the media’s whipping boy toxic masculinity.

Were going to have a look at all three. Let’s start with patriarchy.

Feminists have developed a clever system that they can call on to assign blame for most any problem they might have or see. They call it patriarchy. Basically it holds men as evil and accountable for the ills of the earth and women as its victim.

Here’s one of the only definitions I could find:

Patriarchy is the term used to describe the society in which we live today, characterized by current and historic unequal power relations between women and men whereby women are systematically disadvantaged and oppressed.

Uh huh, right, I believe the idea of women being oppressed in the us was the biggest lie of the 20th century. But let’s move on.

Listen to what Andrea Dworkin a feminist icon had to say about it:

Under patriarchy, every woman’s son is her potential betrayer and also the inevitable rapist or exploiter of another woman.

Every son is the inevitable rapist. Every son means all men. Got it. Now let’s hear from Mary Daly, another well known radical feminist

So patriarchy is a narcissists dream, something to point all the blame at others and at the same time holding you as an innocent victim. Pretty snazzy way to blame men while being blameless. 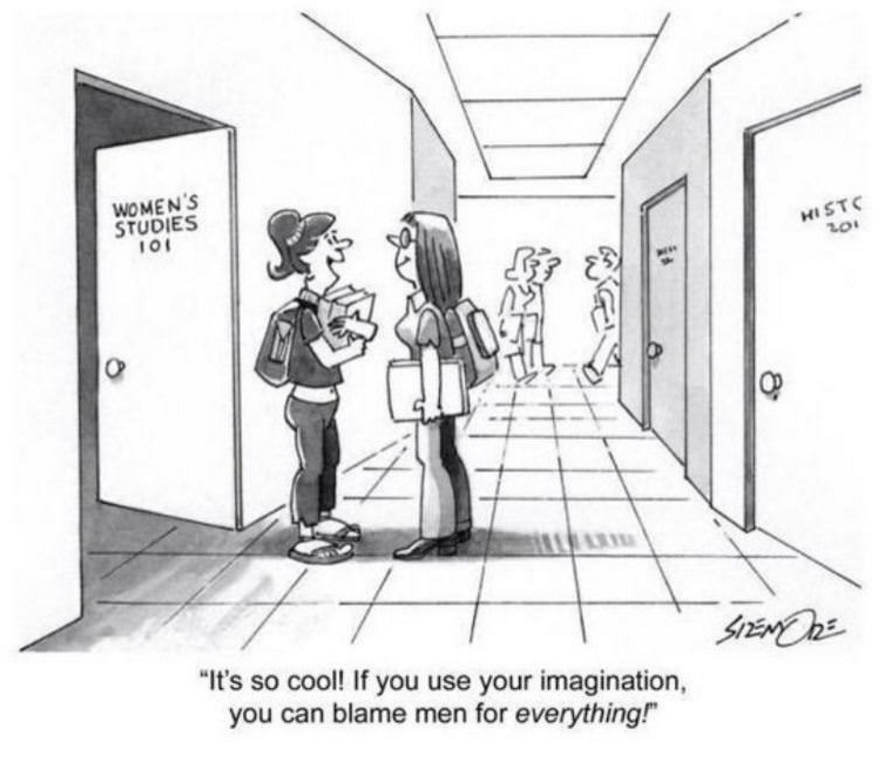 You would think that after many years of making such ground shaking claims that these folks would have research to back them up. Nope, not that I can find. What I saw repeatedly when asked to prove the existence of patriarchy was the pointing towards the fact that more men are the ones in the positions of power.

Okay, gotta agree that men are dominant in positions of power but just how did that happen? These folks would have you believe that eons of evolution of our sex roles have been created just to disadvantage and oppress women! This is an extraordinarily ego centric and self centered claim. It actually reminds me of a 5 year old girl who’s birthday party and pony ride was rained out and she blames it all on her brother. It’s all Jimmy’s fault! He ruined my birthday. It’s all about me! Jimmy hurt me jimmy had a pony ride! She just doesn’t have the psychological maturity to see the actual factors that are involved and needs someone to blame.

When one does look for research about how and why our sex roles have differentiated as they have you get a very different picture. Let’s look at just one tiny aspect, that of testosterone. Scientists are now claiming that the major role of testosterone is to increase one’s striving for status. That’s right, trying hard to win, wanting to be at the top, competing competing competing. Since men have 10 to 20 times more testosterone doesn’t it start to make sense why there are more male CEO’s? The men are pushed by their biology to succeed. To hear more about testosterone and other factors that push men to the top you can see my recent video on that topic.

So wait a minute. Patriarchy is likely at least partially due to biology. Uh Oh. Feminists don’t believe in biology! They think that all of our differences are due to socialization, and that means that even patriarchy is due to socialization! They are what is termed cultural determinists. That means that they see the world only through the lens of how our culture constructs it. Biology be damned! Genetics be damned! Brain and hormones be damned!

So its not hard to imagine feminists getting confused about what is caused by biology and what isn’t. I can guess they might get upset about women not being as tall as men. Patriarchy! Start support groups, get legislation to make women taller, shame tall men. Get the idea? This may be a silly example but it is not far from their myopic gestalt challenged cries of patriarchy

The most perplexing part of this is how intelligent people have failed to call the feminist’s cards. Very few are willing to in argue the ridiculousness of patriarchy theory. When something is this one sided and wrong the most likely problem is likely a bully. I think that is happening here. No one is willing to tell the empress she has no clothes. Academia is petrified to cross the women’s studies gulag. Academia is filled with cowards. 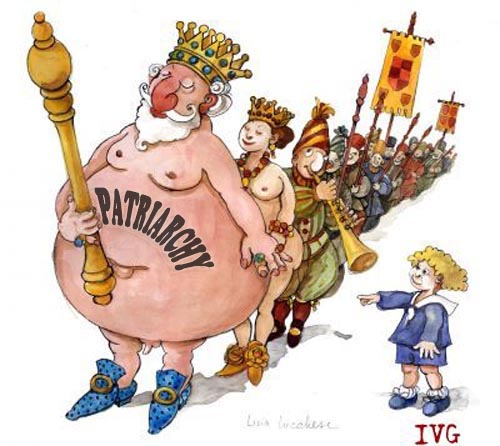 There are some who are willing to question this. Most are men and as usual the men have both clarity and a sense of humor. Let’s take a couple of examples: Here’s one from Milo:

And then an urban dictionary poster named shikaku says patriarchy is:

The bogeyman that feminists blame for women’s problems or under-achievements because their big-girl pants apparently don’t fit. shikaku

And here’s one from Fidelbogen. He says patriarchy is:

A rhetorical device which props up feminist ideology by making it easy to impose a state of collective guilt upon half the human race, namely the male half.

Bravo gentlemen, thanks for stepping forward with the courage to challenge patriarchy.

So the term patriarchy has become a weapon used against men.

At the same time it is a shield to protect women from accountability. I can hear the feminists saying “but but but patriarchy hurts men too.” Yeah, right, that is like saying men are assholes and that hurts men too. Give it a rest. Hate is hate. Blaming a birth group for the worlds problems is hateful. We need to call it out wherever we see it.