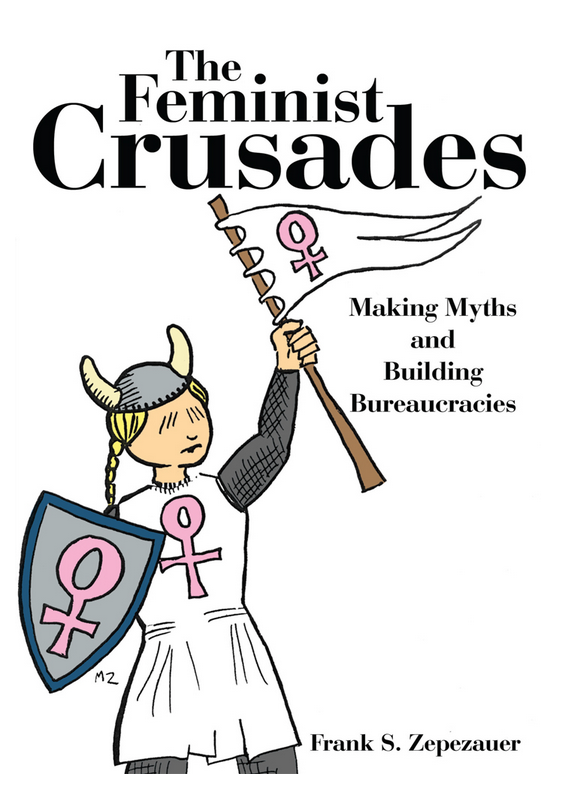 The movie “The Princess Bride” is one of my favorites.  I mention it because when I was reading the book I am about to tell you about that movie kept coming into my consciousness.  Replete with male sacrifice, murder, damsels in distress, males receiving serious injury as a result of dedication and caring and on and on.  The one missing component that was present in the movie but not in this book was, um, “twoo wuv.” Sacrifice was expected but there was no return of love in response, no appreciation, only harsh judgement, complaints, blame, and an endless pit of requests for more than they had received.

The book is written by Frank S. Zepezauer, a male octogenarian and he writes in a way that struck me as being like a storyteller similar to the grandfather who relayed the story in The Princess Bride. This author sets the tone for the book with a basic plot that is applied to each chapter.  First create myths (often with a bogus and later discredited “study”), then appear to be tied to the tracks due to these myths, then garner all of the male rescue you can suck out of your mark.  The title “The Feminist Crusades: Making Myths and Building Bureaucracies” reflects this standard plot.  The intro offers this basic plot and then each remaining chapter goes into the details of how, who, and when the feminists created the myths and then proceeded to set up bureaucracies with the loot they had plundered with their inaccuracies and damseling.  He is very specific about who was spreading these myths, who was supporting them and names the bureaucracies that have been created.  At one point the author asks rhetorically how the feminists were able to get so much so fast and he states that it can be summed up in two words, “They lied.”  He backs this up repeatedly with the details of how the myths (lies) were born and how they gained traction through chivalry and cheerleading from the media to beat the band.  It is a bit overwhelming to see the massive wall of bureaucracy that has been created.

The book also offers a view into the counterpoint to the radical feminist myths that surfaced during their crusades.  There were often people who disagreed with their myths and spoke out publicly. Warren Farrell, Christina Hoff Sommers, Judith Kleinfeld are just a few of those he mentions that spoke out.  Sadly, each time a myth was being created the opposing voices were ignored while the media blindly promoted the feminist myths as fact.  He starts with the issue of health care for women and then moves to education, the workplace, sexual harassment, rape, DV and many others.  Each time he tells the story of just how the feminists created myths, promoted the myths, identified as victims of the myth and then applied pressure due to their being “tied to the tracks.”  Every man, or most every man can’t resist helping a woman tied to the tracks especially if the media is blaring this myth to the general public as if it is gospel. For politicians this is the sort of photo moment that they know will get them re-elected…even if they know it is not true.  And that my friends, is what happened.

Published in 2007 the book stands today as a wonderful archive of the years of feminist myth making offering a birds eye view of the step by step construction of the bureaucratic fortress we see today. It can be especially helpful to those who have an interest in these issues but were very young or not even alive during the times described in the book. You can find this as an ebook that costs only 3.99. The paperback is a little more pricey at 19.98.