If you missed the International Men’s Issues Conference in June of 2014 you missed an astounding event.  Lucky for you it is now online and viewable. (links at the end of this post ) The consistent theme that was heard repeatedly during the event was that the old narrative is woefully inadequate and is being replaced with a new one that improves the focus of compassion and choice to everyone, not just a select few. Exposing this old narrative came from almost each speaker and was described in a wide variety of ways.

I do hope that those who attacked this conference and unsuccessfully tried to shut it down by sending death threats to innocent people will take the time to listen to these presentations.  I think if they take the time to do this that they will find that the speakers all offer a similar message of wanting the best for all people, not just a select few.  They are truly humanitarians.  How could anyone want to shut down a humanitarian event?

I am reminded of a book I read many years ago.  It was a book on human evil by Scott Peck.  The title was People of the Lie: The Hope for Healing Human Evil.  In it, Peck explained that evil was most often practiced by those who would attack others rather than deal with their own failings.  This sort of attack would then leave what Peck described as the hallmark of evil, it would leave a huge amount of chaos in its wake. Of course I won’t need to remind anyone that men’s issues consistently focus on events and problems where men and boys are facing huge amounts of chaos whether it is the family court traumas, the domestic violence industry, or some other misandrist avenue.

I couldn’t help but notice that the First International Men’s Issues Conference had a number of speakers addressing the idea of evil.  Sen Ann Cools, the first black female Senator in North America started off the conference by openly asking how anyone could actually believe the feminist narrative that has been thrust upon us all for the last 40 years.  Senator Cools told stories of her experience in the Canadian Senate that exposed the half truths and the gynocentric majority that turned their backs on the needs of men and boys. Erin Pizzey then gave a remarkable presentation about the plight of men and boys. She labelled what has been done to men and boys, particularly in the domestic violence arena as done by  “The Evil Empire.” Then Tara Palmatier, PhD eloquently and humorously pointed out the lopsided nature of acceptance of the narcissism of girls and women and the shame, blame, and lack of acceptance for boys and men on so many levels.  The conference started off with three women who very eloquently and powerfully labeled the state we are in and the impact this has on boys and men. 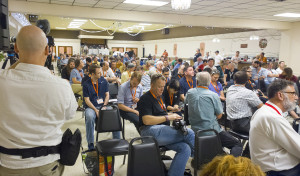 The presentation where I learned the most was from Karen Straughan.  I would highly recommend you check it out.  I had been duped by the idea that feminism in the beginning was actually for equality.  Karen rid me of that notion.  She went into detail about the Seneca Falls Convention and showed clearly how the feminist narrative, even in the 19th century, was clearly blaming men for the ills of the world.

There were so many other presentations that were simply excellent.  I can honestly say there was not one presentation I heard that didn’t get an A. Barbara Kay did a great job in exposing the misandry in the media. Mike Buchanan brought to life the political reality and shared his experience in starting a political party in England to focus on boys and men.  Fred Jones inspired us in laying out what it takes to win a fight that may be stacked against you in the start. Golden did okay talking about men and their unique ways to process emotions and Paul talked about the importance of honoring our blue collar men and the fact that the world functions due to their often unappreciated efforts.

Warren Farrell started off day two with a ten point summation of the most important issues we need to address in order to find success.  As usual Warren is thinking ahead of the curve! Carnell Smith told the story of cupcake and had us all laughing and inspired to keep any eye peeled for the soul crushing impact of paternity fraud. Robert Franklin exposes the partnership of feminists and family court lawyers and their goals of keeping fathers out of families.  Terry Popp focused on the huge problem of suicide in the military and showed the excellent video Purple Heart’s Final Beat.  Then Stefan Molyneux spoke and began by looking at evil and how it starts and stops, moved to circumcision and then beyond. He really kept us all interested and laughing.

What a great group of presentations.  This conference was truly an astounding event.

At this point day two is online on youtube.  The present video is a number of hours long and difficult to navigate and find the beginnings and ends of each section.  For your convenience the links below will take you to each presentation.

Presentation to the VFW