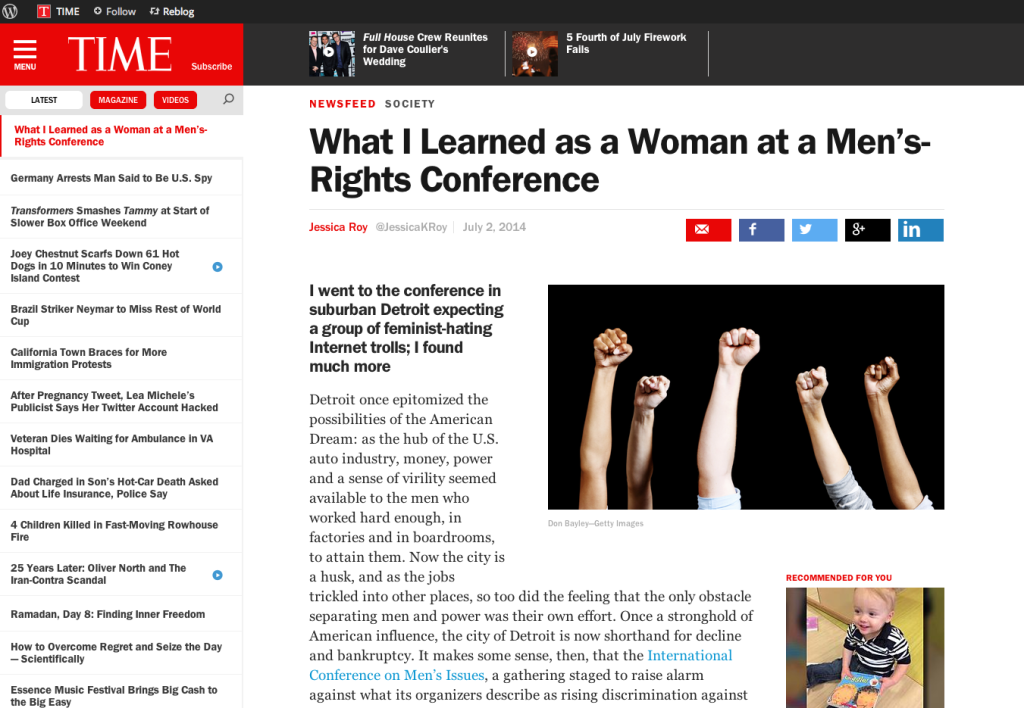 “Crass ideological opponents”
“Paranoia and vitriol”
“Violent Internet histories”
“A palpable distaste for women”
These men laugh at rape jokes.
Describing a Saturday Night Live sketch as if it attacked our beliefs—when it addressed none of our beliefs at all
Mentioning mass murderer Elliot Rodger

These are things Jessica Roy used in describing the International Conference on Men’s Issues and its readers and editors in her Time magazine article.

She went as far as describing a point during the conference when she got the vapors and had to leave the building! Interesting that she doesn’t tell us what content gave her this vaporous experience, nor does she tell us when and if she returned.

Here’s the way her article starts:

I went to the conference in suburban Detroit expecting a group of feminist-hating Internet trolls; I found much more.

It is clear that Roy had very strong preconceived ideas about this conference prior to even setting foot in the venue. In other words, she was prejudiced. In her mind, she seems to have thought that these were her enemies, these were violent and vitriolic opponents who said things so vile that she had to leave the building. It’s little wonder that her article is desperately biased as she clings to her outdated, half-the-story ideological-feminist indoctrination.

Roy peppered the article with examples of how men are indeed in need of services at times but implied that the “paranoid” and “vitriolic” leadership was not doing a good job of getting them the help they need. Presumably, from her perspective, the conference also failed in that regard.

At some points during the article Roy related content from the conference and then immediately offered a refutation. In most good reporting, I have seen the reporter report what transpired and then, when it is an important point, seek out other expert opinions as a counterpoint to help the reader see both sides. In Roy’s case, most of the time she simply saw herself as the expert and worked to refute the claims of the conference speakers. This shows us clearly that this was personal to her; she wanted to refute what was being said. There was “her side” and then the side she was writing about. Her stance as a journalist was biased and far from neutral.

A very strong indicator of her defensiveness and brittle worldview:

Still, being surrounded by men who belly-laughed at rape jokes and pinned evil elements of human nature wholesale on women was emotionally taxing at best and self-destructive at worst. Once, during a particularly upsetting segment of the program, I had to excuse myself from the auditorium to seek refuge on the bug-filled bank of Lake St. Clair. I kept wondering why I had volunteered to fly 600 miles to attend the conference alone, to surround myself not just with crass ideological opponents, but with people with violent Internet histories who believed my very existence oppressed them. But to emerge on the other side of this with both my sanity and a worthwhile story, I would have to actually adopt a grain of their advice. I would have to stop feeling like a victim, and in turn cast aside all of the humiliating and unfair and devastating experiences I had collected as a woman.

Of course “belly-laughs at rape jokes” were hardly the norm for anyone there, and all evil elements of human nature were not pinned wholesale on women; women were just held to be as culpable as men by most of the presenters. And men must not experience humiliating and unfair and devastating experiences as men just because they couldn’t immediately rattle them off for her when prompted.

As an example of the distorted lens Roy sees things through, when Dr. Tara Palmatier showed a slide in a presentation on clinical narcissism, rather than trying to understand or to expand on what Dr. Palmatier was saying about it, Roy decided instead to try to disprove the assertions of Dr. Palmatier without discussion, by claiming it was about how attire causes rape. This is the work not of a journalist but of an ideologue trying to promote their own view of the world. Give them an alternative viewpoint and they go bonkers.

The question does arise: Why would Time magazine send a reporter who was so biased and closed-minded to cover this conference? Maybe like sending an “earth is the center of the universe” proponent to cover a Copernicus news conference. What would you expect from that? Then again, maybe Time doesn’t hire unbiased reporters anymore?

Time magazine is not the only culprit here. The Washington Post also sent a reporter who had strong biases and training that focused more on women’s issues and had left out men and boys. The article she wrote is not unlike Roy’s. It’s biased. Both were obviously steeped in the wrong-headed, half-truth feminist dogma that has been the default of the media for many years. If only either could have listened carefully to the presentations they might have seen the damage their thinking and writing has been doing. Compare either of these articles with this USA Today story on the conference. Note the contrast and that it lacks the bitter hatefulness seen in the other two.

My wife, who attended the conference and is sympathetic to the views expressed at the conference but who could not be described as an “activist,” read the Time magazine article and said, “It’s hard to believe that she related in the article the way she did. It is just bizarre … her perceptions of the situation, it’s way off base.”

I must wholeheartedly agree, having been there myself.

Now it’s your turn. All of the presentations at the conference are now online and linked below and free for viewing. Have a look and decide for yourself whether you agree with my wife or with Jessica Roy. I am betting strongly on my wife.